People with a developmental disability (DD) need a champion, an iconic figure that encompasses public perception, one that transcends time and political isles: consider the Scarecrow from The Wizard of Oz. 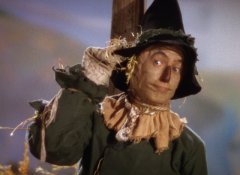 Throughout history people with developmental disabilities have aligned with the Scarecrow. They’ve been perceived as inferior, sub-human, and subject to inhumane treatment, including tied to a stake—although not for utilitarian crop-protection purposes, but to be burned.  A chronology from Teaching for Diversity and Social Justice by Adams, Bell, and Griffin records that through to the 1700s people with DD in many countries were considered evil, possessed. Public policy at the time was torture, burn, or leave to die.

Toward the Age of Enlightenment attitudes and policies shifted slightly. People with DD in the United States had a champion and were upgraded from evil to defective. They had an advocate in Dr. Samuel Gridley Howe, who appropriated money from the Massachusetts legislature in 1848 to teach “idiotic children.” He later founded the Massachusetts School for Idiotic and Feeble-Minded Youth in 1850, believing in their ability to learn.

While Howe did pioneer educational change, he was no Scarecrow—he was not on the receiving side of the fence. He could go only so far in the face of flying monkeys.  These monkeys, including the Nazi regime, practiced methods deemed appropriate for people classified as “defective.” Yet Germany was not the only country who targeted them for sterilization and euthanasia. They may have been the biggest monkeys, but they were followers not leaders in this movement.

The Nazis were guided by the Wicked Witch of the West: The National Eugenics Office in New York.

The National Eugenics Office, a center of human traits and genetic study, presented their study in February, 1914:  “Committee to Study and to Report on the Best Practical Means of Cutting Off the Defective Germ-Plasm in the American Population.” They investigated “all phases of the problem of cutting off the supply of defectives.” They listed “Classifications of the Socially Unfit.” People with DD, identified as The Feeble-minded Class, were first on the list and determined by the committee to be idiots and imbeciles and the “greatest of all eugenical problems.”

Nazi rule passed German Law for the Prevention of Genetically Diseased Offspring in 1933, implementing sterilization. In the Adams et al. chronology, by 1939—when MGM produced The Wizard of Oz—Hitler was lockstep with 45% of the U.S. who believed in euthanasia for “defective” infants and began Germany’s Euthanasia Program on people with DD, the guinea pigs for selective race:

70,000 adults and 5,000 children put to death during the official phase and over 200,000 killed in total. Children were killed with morphine injections, gassed with cyanide or chemical warfare agents. They were also slowly administered poisons, starved to death, and exposed to cold so that the deaths would appear “natural.”

The United States Holocaust Memorial Museum further describes the transition from elimination of the “unfit” toward racial genocide: “The most extreme measure, the Euthanasia Program, was in itself a rehearsal for Nazi Germany’s broader genocidal policies.”

Edwin Black in his book, “War Against the Weak: Eugenics and America’s Campaign to Create a Master Race,” writes the “lethal chamber” was the “most commonly suggested method of eugenicide.” He also notes doctors and institutions opted out of “organized lethal solutions,” operating in favor of covert techniques such as giving institutionalized patients milk from tubercular cows and other death-by-natural-looking-cause methods.

Neurologist Foster Kennedy encouraged elimination of the “hopelessly unfit.” Under the spell of the Wicked Witch of the West, Kennedy published an article in the American Journal of Psychiatry in 1942, promoting euthanasia of the “feebleminded” as a mercy killings: “Here we may most kindly kill, and have no fear of error.”

Slowly, advocates for people with blindness, mental illness, and physical disabilities—like Jacobus tenBroek founder of the National Federation of the Blind and Professor Timothy Nugent of the University of Illinois—rose up. They fostered programs and legislation that brought disabilities out of obscurity. Developmental disabilities, however, stayed in the shadow of other disabilities for years, a sub category. Some states in the 50s preferred they stay out of sight: “prohibiting persons ‘diseased, maimed, mutilated, or in any [way] deformed so as to be an unsightly or disgusting object’ from appearing in public.”

Then from 1954 to 1960, legislation journeyed down the civil rights road, beginning with Brown v. Board of Education and Social Security Amendments. A storm was brewing.

The White House fell in on the witch in 1961 and out stepped John F. Kennedy. JFK implemented the President’s Panel on Mental Retardation—a beginning that fundamentally challenged the institutional status quo. The world up to this point had never seen an advocate for people with developmental disabilities like JFK. He was intimately familiar with the challenges and the abilities of people with DD. For him there was “no place like home,” and home, community, is where he believed all people belonged.

Since JFK’s time there have been individuals and parent lead grassroots efforts and groups such as The Arc who have been instrumental in systemic change—hard fought battles against public perception and public policy. There have been heroes of specific diagnosis like Temple Grandin for Autism. Still, as sympathetic as JFK was, there has never been a universally accepted champion, an empathetic one that embodied the misjudged, mistreated, mistaken essence of people with developmental disabilities like the Scarecrow.

Certainly times have changed for the better. Labels have transcended with perception and treatment from evil to idiotic to defective to retards to entitled. People with DD and their caregivers are now much less victims of institutions than they are of bureaucracy, budget cuts, and political warfare: Individual with Disabilities Education Act (IDEA) noncompliance battles; health and economic losses on unsupported family caregivers; 300,000 eligible people with DD on waitlists for Medicaid services with vague wait times of five to twenty years.

People with DD are eclipsed in the Medicaid conversations, a subgroup yet again. According advocacy nonprofit organizations like The Arc, people with developmental disabilities are “still in the shadows.” Sprout films about and by people with DD dedicate their mission to “making the invisible visible.” Meanwhile, mega-profit corporation COKE prints “you retard” on their product caps and selectively excludes this minority in their “diversity” commercial.

People with developmental disabilities need a high-profile champion. They need a recognized celebrity like Michael J. Fox for Parkinson’s and Elizabeth Taylor for AIDS. They need a nonpartisan pilot of their balloon: the Scarecrow. They also need Professor Marvel to reach in his little black bag and give congress a brain, courage, and a heart so that the elected power-that-be eliminate the Medicaid Home and Community Base Services (HCBS) waiting lists.

People with developmental disabilities need a voice that will be heard, seen, and respected.  After all they have been through, they deserve it.